Built-up roof membranes, referred to by the acronym BUR, have been used in the U.S. for more than 100 years. These industrial roof systems are commonly referred to as "tar and gravel" roofs. BUR systems are generally composed of alternating layers of bitumen and reinforcing fabrics that create a finished membrane. The number of plies in a cross section is the number of plies on a roof. The term "four ply" denotes a four ply roof membrane construction. Sometimes, a base sheet, used as the bottommost ply, is mechanically fastened. Built-up roofs are generally considered to be fully adhered if applied directly to roof decks or insulation.

Modified bitumen (MB) roofing is an asphalt-based, close cousin of the built-up roof (BUR) that is designed for industrial buildings with low-slope or “flat” roof structures. Engineered modified bitumen roofing membranes originated in Europe in the mid 1960's and have been successfully used in the United States and Canada since around 1975.

Modified bitumen roofs give designers and installers an even broader array of options than BUR. MB may be installed by the torch-application method, “hot-mopped” like BUR, or applied with “cold-process” adhesives. The latest innovation with MB is the self-adhering sheet. Using special combinations of polymers to modify the underside of the MB sheet, the rolls are manufactured with a release paper. The installer removes the release paper and as the sheet is rolled out, it adheres itself to the substrate. This method eliminates the risks associated with the use of torches and hot asphalt, and is completely free of VOC (volatile organic chemicals) fumes during and after application. 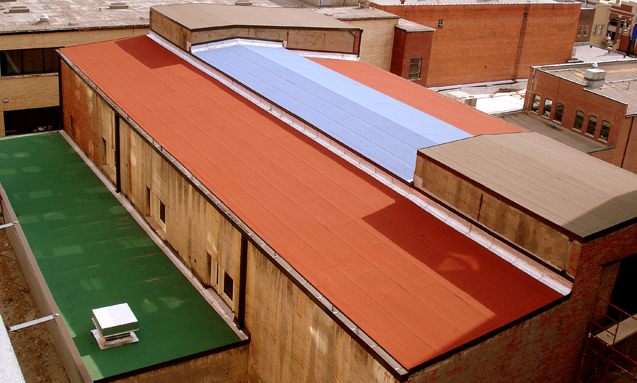 We Are Here For You…